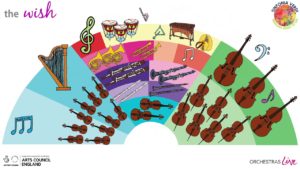 Several advanced young musicians from the local areas  joined Sinfonia Verdi on stage, gaining experience of performing alongside professional players whilst acting as role models for the young audiences.

This project was produced by Orchestras Live in partnership with the Music Education Hubs for Bedford, Central Bedfordshire, Luton and Milton Keynes together with Sinfonia Verdi.

More information about The Wish, including photos and films, can be seen on the Orchestras Live website: http://www.orchestraslive.org.uk/featured-projects/the-wish/