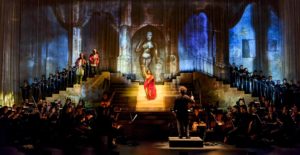 Delighted that Ravi Shankar’s Opera Sukanya is on AllMusic’s Best of 2020 list.

Here is their review, written by James Mannheim:

At the height of his fame in the late 1960s and early 1970s, Ravi Shankar explored East-West fusions in both the pop and classical realms. Among his works are three concertos for sitar and orchestra. Late in life, he turned once again to the fusion question, and at his death in 2012, at age 92, he left an unfinished opera, Sukanya. It was shaped and completed by his daughter Anoushka Shankar and the conductor of the present performance, David Murphy. This recording, taken from a live performance in 2017, marks its world premiere. The libretto, taken from a story in the Indian epic poem The Mahabharata, is about a princess who marries a much older sage, is in English, and is a bit splashy, with echoes of Shankar‘s own life; Sukanya was the name of his third and final wife. Broad-strokes libretti are hardly unheard-of in the operatic world, and the music here qualifies as a profound breakthrough. Some of Shankar‘s earlier fusion pieces essentially used the Western orchestra as a giant device for establishing the tonal world of Indian music. He still does that in Sukanya, but he also does the converse, with Indian classical solos for the sitar and the oboe-like shehnai blooming into Western operatic vocal solos and duos. These work up to big climaxes of an entirely Western sort; the one at the end draws cheers that would be the envy of any opera house. The orchestral writing here is more sophisticated than in Shankar‘s earlier experiments of this kind, and the whole production has a kinetic feel that’s immensely entertaining. It’s also really unlike anything anyone else has ever done.

The opera recording is making a splash in many parts of the world, e.g. David Dalle on CKCU fm writes: “Ravi Shankar’s final work, completely unexpected, unique, and magnificent!”

Today I am featuring an extraordinary new recording which was both completely unexpected and an utter delight. A live recording from the premiere of Ravi Shankar’s final work, his opera Sukanya. Ravi Shankar first had the idea in the 1990’s of composing an opera for his 2nd wife Sukanya, who was named after a princess in a story in the Mahabharata who falls in love and marries an old sage. Ravi Shankar saw parallels with his own life, as there were over 3-decade age difference between himself and Sukanya. The story of Sukanya is a sweet and joyful love story, and Ravi Shankar intended it as a gift for his wife. Shankar had first composed orchestral music combining Western classical and Indian classical music with his two sitar concertos from 1971 and 1981 and composed a symphony later which was premiered by the London Philharmonic in 2012. At 90 he decided he wanted to write the opera knowing time was fleeting, he worked feverishly on it during his last two years. It was not completely finished, and his daughter Anoushka and his longtime collaborator conductor David Murphy worked together to complete the score. The whole opera is based musically on Rag Yaman Kalyan, Sukanya’s favourite Raga and the raga Ravi Shankar was playing when she fell in love with him. I find the orchestral writing and the fusion with the Indian soloists is far more sophisticated than his earlier concertos from the 70s and 80s. The opera soloists do a wonderful job singing Sargam, there are many unique and enchanting moments like the Indian percussionists performing the vocal konnakol while the soloists sing operatic arias above, extremely tender and beautiful moments, and overall, a work of enormous exuberance and deep joy. I did not expect there was an opera from the 92 year old Ravi Shankar waiting to be heard, astonishing, wonderful! The opera received its premiere with David Murphy conducting the London Philharmonic, solo singers, the BBC singers and five Indian classical musicians: Parimal Sadaphal on sitar, Ashwani Shankar on shehnai, Rajkumar Misra on tabla, M Balachandar on mridangam, Pirashanna Thevarajah on ghatam and morsing, the latter two percussionists also performed the vocal percussion konnakol. The premiere was recorded and just recently released. The opera has also received a repeat performance by the London Symphony Orchestra this past January with most of the same musicians. You can read more about Sukanya and read the libretto by Amit Chaudhuri here: https://issuu.com/londonphilharmonic/docs/lpo-0115_sukanya_booklet_pages